How Multitasking is Actually Destroying Your Productivity

You probably think you’re a multitasking master; we all do to some extent. Right now, you’re probably reading this post, finishing up a text to your roommate and jamming to some tunes, all while contemplating what you’re making for dinner tonight. The truth is, multitasking actually makes you less productive… significantly less productive. 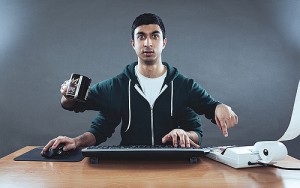 The term multitasking first appeared in the 1960’s as a term to describe computer functions, not people. The word was created to describe a computer’s ability to quickly perform many tasks at once. Multiple tasks sharing one resource — the CPU. However, the term has since been taken on to mean multiple tasks being completed at the same time by one resource — a person.

Unlike a computer, the human brain cannot process multiple tasks quickly. Every time you switch between tasks or thoughts, it takes your brain seconds to minutes to refocus and actually complete the task. Some research suggests that avid multitaskers actually lose up to 40 percent of their productivity each day attempting to multitask.

Multitasking during meetings or conversations is especially unproductive, even rude. If you’re checking your email or social media accounts during a call or meeting, then you aren’t giving the person speaking your full attention. You’ll likely miss important facts and find yourself lost.

Having trouble breaking your multitasking habit? It may not be entirely your fault. When we multitask, the hormones cortisol and adrenaline are released, which overstimulate the brain and cause fuzzy thinking. This overstimulation occurs every time you finish reading a post, sending a text, etc. Your brain then rewards this overstimulation by releasing endorphins. This creates a feedback loop where you become unfocused and then rewarded. Essentially, your brain becomes addicted to multitasking.

Want to kick the habit? Try using a productivity technique that forces you focus on one task at a time. Maybe try the Pomodoro Technique (featured here) or maybe a simple to-do list to keep you on track. Better yet, take the Next Step Academy course on time management to remind you that you can do it all — just not all at once.