In the News: Changes to FAFSA to Help Students Receive Aid

The Free Application for Federal Student Aid (FAFSA) is making several changes to impact students in the upcoming academic school year. This year, the form for the 2017/2018 school year will open on October 1st with the priority deadline changing to December 1st. This is four months earlier than past years. 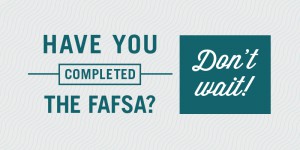 Changes to the FAFSA will allow students to know how much aid is available to them earlier, giving them more time to accurately assess their financial situation before committing to a school. Before these changes, financial aid information often arrived less than a month before students had to decide on a school. Now students and their families have several months to explore financing options and figure out whether they can afford tuition.

There is some concern that changes to the FAFSA application dates will influence schools to change their decision dates as well. Federal officials have requested that schools refrain from making changes to their own deadlines as this would make the FAFSA changes irrelevant.

Posted in College Tips, In the News