Give Your Speech Writing Flair

You’ve been tasked with giving a speech to a large audience and you want to make sure it’s memorable. Here are several writing techniques you can implement to give your speech flair and get the point across. 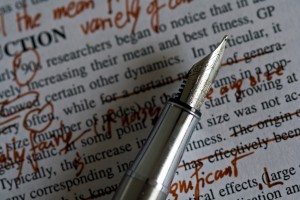 Epiphora. This is the use of repetition at the end of successive clauses or phrases. Using epiphora is a great way to emphasize a specific point and amplify an important idea. A famous example of epiphora you may be familiar with is from Abraham Lincoln’s Gettysburg Address.

“… that this nation, under God, shall have a new birth of freedom—and that government of the people,
by the people,
for the people,
shall not perish from the earth.”

Lincoln repeats “the people” three times to reinforce the idea that the government is not an abstract idea, but an institution interconnected with the people it governs.

Anaphora. Like epiphora, anaphora uses repetition except at the beginning of a clause or phrase with the same goal of reinforcing a point or idea. Martin Luther King Jr. used anaphora at a rally in Yazoo City, Mississippi.

Chiasmus. If you’ve heard the phrase “when the going gets tough, the tough get going” then you should already have a pretty good understanding of chiasmus. Chiasmus is the repetition of two words or phrases in a successive clause but in the reverse order. Chiasmus is a catchy technique and has been used in famous speeches such as John F. Kennedy’s inaugural address.