Web developers are responsible for designing and creating websites. This field is growing rapidly and is will continue to grow as the world becomes more mobile and focuses more heavily on e-commerce.

A bachelor’s degree in information technology or a related field is recommended for aspiring web developers. A bachelor’s will typically take you four years to complete and you’ll take classes that focus on programming languages. However, you’ll need to stay updated on new computer languages and updates to languages throughout your career, meaning you’ll never truly stop learning.

Employers prefer hiring graduates that already have some experience in graphic design, so you’ll want to take some design or website layout classes as well. 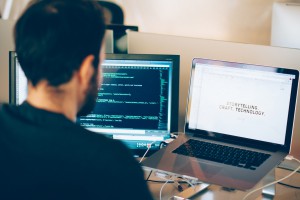 Back-end developers create the framework for the site and are in charge of the technical construction of the site. They write the code for the site, typically using computer languages such as HTML and XML, though other languages may be necessary as well.

Front-end developers create the site’s layout, design and applications. They are in charge of integrating graphics, audio and video into the site.

Webmasters maintain websites after they are completed. They monitor site traffic, keep the site updated and test functions for errors, keeping the website working properly.

As mobility becomes increasingly important, web developers need to create sites that accommodate multiple screen sizes, such as smartphones and tablets in addition to desktops.

The Bureau of Labor Statistics reported the average annual salary for web developers as $64,970 in 2014. Web development is expected to grow 27 percent by 2024, 15 percent faster than the average of all IT occupations.

Take Next Step Academy’s “Careers in Web Development” course to learn more about this professional path!